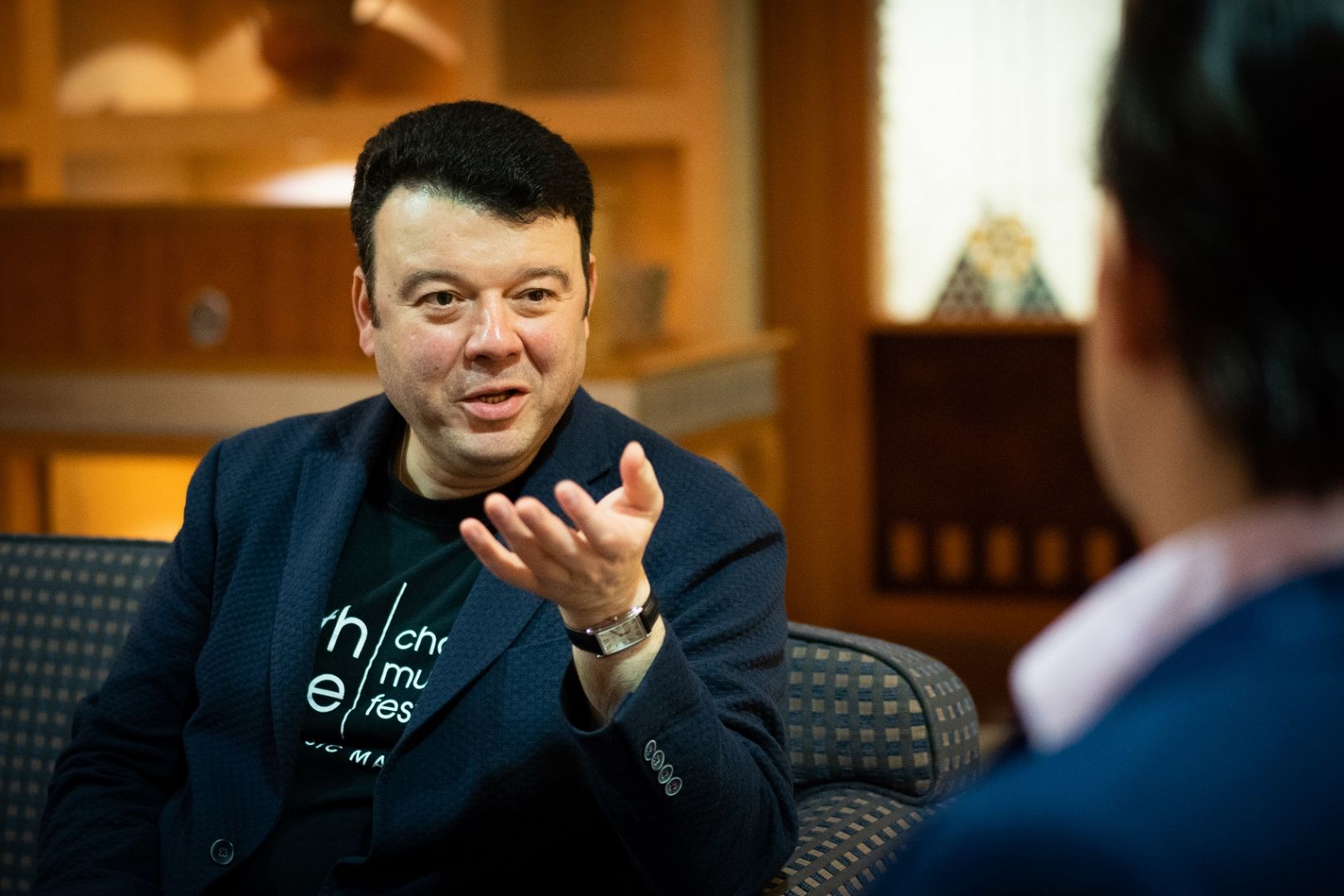 The world-famous violinist came to Hungary following an invitation from the Franz Liszt Chamber Orchestra, and on 25 October, he will take the position of the concertmaster on the stage of the Academy of Music. Only for a short time though, as in the second half of the evening he will be playing a double concerto with István Várdai. We have reached out to him after the first rehearsal.

The Franz Liszt Chamber Orchestra is an experienced ensemble, usually playing without anyone directing them. Don’t you find you are having a hard time?

Our first practice went fabulous. It’s like dancing – dancing with a new partner. We were not using our legs, however, but our ears; the most important thing for me on the first rehearsal is to understand my partner, to understand what the members of the orchestra think of the music and what do they want to play. Situations like this are first and foremost about trust. By the way, this is not the first time I met the Franz Liszt Chamber Orchestra, because we have also played together during the times of János Rolla. It is a great honour for me to take the leader’s role.

Do you feel comfortable with it?

Of course. I am at ease, similarly to when I am playing as a soloist. But please don’t let me choose between the two.

There is no need for that, especially seeing how you will play as a soloist on the concert, while contributing as a concertmaster as well. What do you like about the Franz Liszt Chamber Orchestra?

I gave this question a thought already, so the answer is easy. There are two things. The orchestra has a clearly recognizable, characteristic sound which reflects the work of generations. When you listen to them, you immediately know who is playing. Believe me, this is not something that can be achieved easily! The other thing is the chamber music feel, and by that I am not referring to the size of the ensemble. The members of the orchestra lead and follow each other, just like chamber musicians need to. They also seem to know each other well. During today’s rehearsal, we felt mutual respect, and that is all what matters at the end of the day. On the other hand, this is not only true for music, but for life as well. This world would be a much better place if we worked together like an orchestra.

Have you met István Várdai before, the artistic director of the ensemble?

Of course, we met years ago on a chamber music festival where we played a Schubert quartet. István has a natural talent for self-expression, although it is something you also have to learn. He is able to keep his partners on the move, whereas he is also providing security while playing. Last but not least, the cello in his hands has a beautiful, clear voice.

Your sound is regularly described as belonging to the Russian-Jewish tradition, rivalling Jascha Heifetz, David Oistrakh or Vadim Repin.

That is a mistake. I do not belong to the Russian school.

What would you say, which school do you belong then?

I don’t belong to any of them. And for sure, not to the Russian, that is all I can say. I studied for eight months only from Zakhar Bron in Novosibirsk, while my first teacher in my hometown, Riga, was a representative of the German tradition. Then life brought me to Israel, whereas in New York, when I studied at the Juilliard School, I became a student of Dorothy DeLay who was affiliated with the French school through her master teacher.

Do you remember why did you start playing the violin?

There are no special stories to it. I went to a music school that prepared its students for the conservatory. They didn’t ask us what we wanted, they just gave the instrument to our hands, saying “you shall become a violinist”. In the end, seven students were selected, only the most talented, and I was one of them. This is how the Soviet Union worked. And all the way I wanted to play the piano.

Why would that be so?

Why? It is rather ridiculous. I heard it from my parents that the piano is the king of musical instruments, while the violin is the queen. At the age of six, of course, I said I would opt for the king.

And what do you think about it now?

In the end, everything turned out well. I recently met some of my former classmates and all of us have stayed on the path – some of us became soloists, others started teaching and yet others have joined orchestras. There was one thing in common, however: we all faced that “what if…” question. What would it have been like if we could have decided upon our lives? In a society where you are not given a chance, these personal crises tend to hit harder.

Do you feel freer now in Chicago and Tel Aviv?

Certainly. It came to me as a shock that I am free to control my life and can express my opinion to my teachers, for example.

You also have your own master classes. What do you want to pass on to your students?

I don’t take myself that seriously – I don’t have my own method or school. I listen closely to the students, I provide reactions, and I try to get to know them to find out what is working with whom, what is still allowed and what is that you mustn’t force.

Listening is the most important part of music, for sure, which is also true for teaching.

When you are not playing or teaching, what do you listen to?

Silence. As I am surrounded by music all the time, I really need some silence as well. I like reading or going for a walk – once we finish this interview, for example, I will take a short stroll.